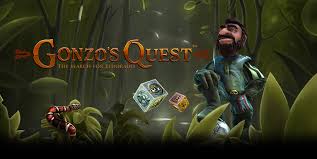 Gonzos Quest is a Spanish Conquistador themed slot machine from Net Entertainment. It is a 3D slot machine game that uses as its backdrop the lost city of El Dorado. The central character is based on Gonzalo Pizzaro, a historical character from that South American region.

A 5-reel and 20 payline 3D slot game, Gonzos Quest is to be found in Net Entertainment powered casinos, or casinos offering Net Ent games. This slot machine has a coin value range of 0.02 up to 1, with a total of 5 coins per payline accepted. The minimum and maximum wagers in Gonzos Quest are 0.40 and 100 respectively.

The Symbols Drop Into Place

A series of masks and faces on square stones make up the standard icons in this slot game. Blue, green, yellow, purple, brown, red and turquoise coloured icons are all represented. The main one is the blue icon, a face with large earrings, and it is worth 2500 coins if five are struck on a payline.

Unlike other slot games, that feature spinning reels, Gonzos Quest drops the icons into place. Basically, instead of the reels spinning, symbols fall into the reels, and if a payline matches up, the symbols disappear and are replaced by other icons.

There is a scatter symbol in Gonzos Quest that triggers the Free Fall round. Three or more Golden icons activate 10 free falls. During this bonus round, a 3x multiplier is added to each win that the player has, with multipliers of 6x, 9x and 15x also possible in this round. Gonzo will catch all of the winnings in his hat, once this bonus round is over. The Free Falls round can also be re-triggered during Free Fall gameplay. This bonus round is really a free spins bonus round.

The grey stone featuring the question mark is the Wild icon in Gonzos Quest slot game. The Wild symbol can substitute itself for any other symbol on the reels. When using the Wild icon, the game will only payout the highest win per bet line, and only pays out on wins that occur from left to right on the payline.

The Avalanche feature enables players to take more than one win from any single spin in the game. Once the icons have dropped onto the reels, the Avalanche gameplay feature is triggered. If a player has a successful win on a payline, those symbols disappear and new ones drop on top of the existing ones. If the player has another successful win, the payout is larger as there are multipliers involved. Multipliers in standard gameplay involve 1x for the first win, 2x for the second consecutive win in an Avalanche, 3x for the third and 5x for the 4 or more Avalanched wins.

During the Free Falls round, players receive slightly different multipliers for Avalanches, with players pocketing a 3x multiplier for the first win, and multipliers of 6x, 9x and 15x for consecutive avalanches.

There are therefore plenty of bonus features, excellent graphics and good sound in Gonzos Quest slot machine game. Gonzo Pizzaro adds a certain degree of humour to this casinoslots NZ round.