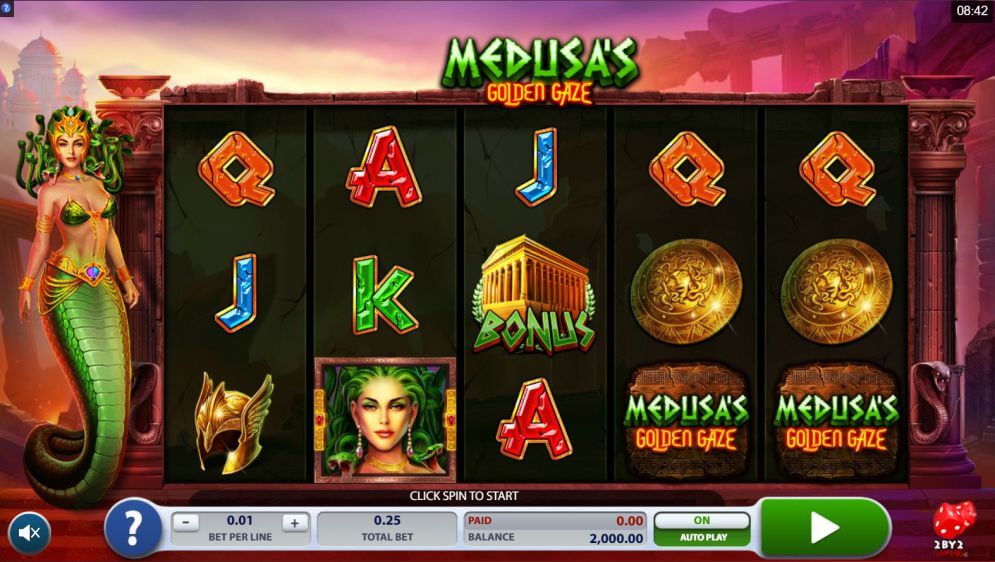 Medusa is documented as a powerful monster-like creature from Greek mythology. She is known for her half human half snake appearance, and legend says that anyone who stares into her eyes will turn to stone. Playtech has capitalised on this mystical creature and have powered an online slots game around this theme. It’s a 4 reel, 12 payline online slots game similar to most but with a bit of a twist.

The layout of Medusas Gaze online slots is quite a bit different to most other slots layouts. Medusas character is found at the centre of a circle with 4 rings around her. Each ring consists of multi-coloured blocks, and it’s with these blocks that players will gauge their winnings.

The background is stone like featured leading the imagination to believe that the game is being played from Medusas cave. The lighting is a bit dull but is compensated for by the multi-coloured tiles that rotate in and out of sequence with every spin.

The graphics are strong but simple and depicts a strong Greek colour pallet across the screen. The sound effects are minimal, Medusa and her hair of snakes do however acknowledge a winning combination by hissing sounds, and there’s an eery tune lightly playing in the background.

As most real money slots Australia games carry reels with symbols on them Medusas Gaze online slots doesn’t, and instead is based on each tiles colour. There are 8 colours in total from which a match can be made.

Players can choose their stakes by increasing or decreasing the amount they’re happy to play with, or they can choose the max stake button. There is also an auto play option that will play on the player’s behalf automatically until a winning combination is hit or until the player intervenes and stops the auto play.

Bonuses and the Wild Card

Medusas Gaze sets itself apart from the rest by presenting its reels with colours instead of symbols, and the same goes for the wild card. The wild card in this case is the white coloured tile. The white wild card alongside any 2 of the same colour tiles will register as the same colour essentially making a 3 tile win.

The added bonus that is offered in this game is the multiplier, after every winning combination the next spin is multiplied by 1 and so it carries on after every consecutive win thereafter allowing for the potential of attractive payouts.