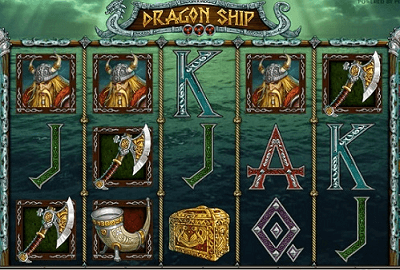 The dragons of the Dragon Ship slot from Play’n GO software, which players can find at several online casinos, are not the fiery reptiles of mythic folklore. Instead, Dragon Ship celebrates the creatures’ artistic significance in the eponymous longships of fearless Viking explorers. The five reels hang between carved wooden masts adorned with ironwork and topped with dragons’ heads, and the iconic dragon figurehead of a longship’s prow serves as the game’s Wild symbol.

The rest of the Dragon Ship iconography is devoted to a stern Viking and the artefacts of his world. Simple knotted ropes divide the reels, and the sound effects accompanying game play are the creak of rigging and the ripple of wind and waves against the hull. The dangerous reality of a long voyage in an open vessel across uncharted seas makes up the background: endless, sullen-looking ocean with a pale sun fighting its way through threatening clouds.

Players can adjust the 15 paylines, 1 to 5 coins per line and coin denominations ranging from 0.01 to 0.25, according to their budget, but the best prizes are paid for 5-coin bets.

To offset the forbidding greenish greys of Dragon Ship’s ocean backdrop, Play’n GO designers have clad the payline icons in detailed drawings and sumptuous colours. Top card-deck values 10 to A are rendered in angular characters reminiscent of runes, their varied hues embroidered and embossed with iron. All the payline symbols need three matches or better to win prizes. Q, J and 10 win equal prizes, as do the K and A. Five Ks or As win 150 coins.

An ornate drinking horn and elaborate shield are also matched in value, winning up to 250 coins. A fearsome war axe, inlaid with copper sigils, wins 500 coins for five of a kind. The bearded blonde Viking, lowering under his horned helmet, is the top-value payline symbol. For three, four or five matches, this icon scores 100, 500 or 2,500 coins.

The Dragon Ship Wild is a fantastically carved dragon prow, its eyes glowing with unfathomed magic. It serves as a substitute only, with no prizes for matching with itself, but it can arrive stacked to cover all three symbols on a reel. This gives it the potential to complete different matching wins on multiple paylines simultaneously.

If stacked Wilds cover both Reels 1 and 5 on a spin, the player gets a round of 15 free spins. These two reels will remain locked as stacked Wilds for the duration of the free games, again creating the possibility of several high-value wins at once. During free spins, combos can be made right to left from Reel 5 as well as left to right from Reel 1.

Dragon Ship’s Bonus Scatter is an elaborately carved golden treasure chest. It appears only on Reels 1, 3 and 5, but on all three at the same time, it activates the bonus rounds on regular basis. The three triggering chests expand to fill the reels, and the player must pick one to reveal an instant money prize. These range from 10X or 20X the total spin bet, to impressive multiples like 200X or more.