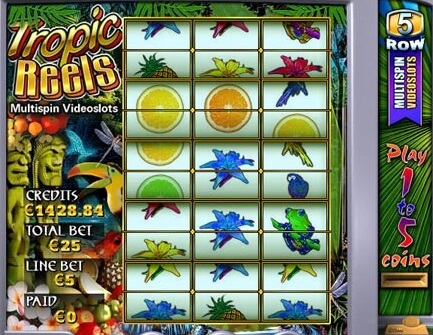 Tropic Reels is a Playtech powered multi-spin online slot game that has three reels and five rows which are five independent pay lines. The pay lines can be selected and the betting levels determine the value of the wins. The online slot game has wild symbols and a multi-spin hold feature. There are no scatter symbols, bonus games or free spins.

As the name suggests, Tropic Reels online slot has a tropical theme. The background is a tropical view reminiscent of Easter Island. Statues stand to the left with a toucan peeking from behind the reels. Tropical sounds are heard throughout game play.

Control buttons are situated, as usual, below the three reels. These include access to the pay table and the bet max button. Coin values can be adjusted on the left of the control panel with the plus and minus buttons.

Tropic Reels online slot has 23 possible combinations that pay out various amounts. The symbols include various tropical wildlife, plants and fruit. The wild symbol is the tiger. It stands in as any of the symbols if necessary and is also the top paying symbol. Three wilds lined up on a pay line awards the 2 500x jackpot when the maximum bet is placed.

Two or one wild symbol pays out 10x or 1x respectively while three, two or one pineapples pay out 10x, 3x or 1x. All symbols, apart from the wilds and pineapples, only pay out for three matching or certain mixes of symbols.

The multi-spin hold feature is present on every spin. The five rows of the three reels are actually five pay lines that spin independently. The first spin that takes place on the Tropic Reels sees the fifth and bottom pay line spins on its own. Any one of the three reels on that pay line can then be held after it stops spinning by clicking on the hold button directly under the chosen reel. All other symbols that match the held symbol then stay in their position for one more spin.

The multi-spin hold feature is the main Tropic Reels feature that is most profitable when the pay table is understood as some symbols pay more or land more often than others.

The Tropic Reels jackpot is 2 500x the pay line value but can only be won with the maximum five coin bet. Lesser bet values mean the jackpot decreases to 2 000x and less.

Each of the five pay lines can have up to five coins placed on them. The coin sizes range in value starting at 0.01 and ending with the highest value of 5.00. The maximum bet for every spin is therefore 125.00.