Savanna King is an online video slot game created by Genesis Gaming software developers. The game contains 5 reels and 1024 pay ways in place of the standard slot game paylines. This feature is called ‘All Pays’, and creates winning reel combinations from any matching game symbols that spin in on adjacent reels.

The game is African-themed and features a host of African animals, as well as the Savanna king himself, the majestic lion. Savanna King offers scatter symbols and 2 wild symbols, as well as a Savanna Stampede Free Spins bonus feature that offers players free spins and up to 4x win multipliers.

The game is set on a savannah backdrop complete with clear blue skies, a rocky ground and tall trees. The game opens to the soundtrack of tribal drums beating in the distance, and this rhythmic African drumming continues throughout the game to create an atmosphere of a true African safari adventure. The pay table is simple with a nature-related theme, and on the reels are a variety of lifelike African animals.

During the game, there are also sound effects of rhinos snorting and lions roaring, and animated zebras nod their heads and giraffes poke their tongues out at players as they spin the reels. Antelope will also stampede across the screen when involved in a winning reel combination. 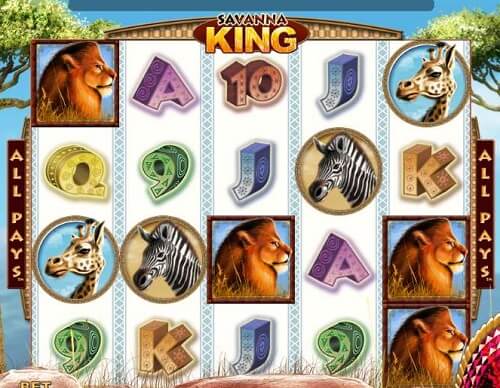 The reel symbols in Savanna King include graphics of lions, giraffes, antelope, rhinos and zebra. There are also playing card symbols 9, 10, J, Q, K and A, which are decorated with African patterns for added effect.

The ‘Savanna King’ logo is the game’s scatter symbol. Landing 3 or more of these symbols will activate the Savanna Stampede Free Spins bonus game feature.

The wild symbol in Savanna King is the golden ‘Wild’ icon. This symbol appears on reels 2, 3 and 4to create more winning combinations, and can substitute all game symbols except for the scatter.

During the free spins game, wild symbols will turn into multipliers that will randomly award players with multiplied wins of 2x, 3x or 4x each. 2 wild symbols can also multiply with each other to create wins of up to 64x during the Savanna Stampede feature.